Echoes of a past and intimations of a future 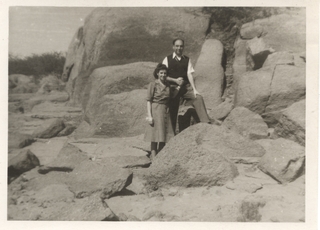 My parents on their honeymoon in Luxor in 1937
In 1937, my parents, Guido Mosseri and Joyce Smouha, were married in the Nebi Daniel synagogue, in Alexandria, Egypt. The synagogue was ablaze with flowers and candles and packed with relatives and guests. So it was with a gathering sadness that I read a recent blog in Tablet Magazine (see my biography page for the link) and learned that a handful of elderly Jews -all that was left in Egypt from a community 80,000 strong - will in fact be deprived of a rabbi and cantor and do not have enough men for a minyan as we approach the High Holidays. Rosh Hashana services will not be performed in Egypt in 2012, probably the first time in 2000 years.
As Egyptians riot in self-righteous clamor in the name of insults to their faith, and Libyans commit murder in the name of outraged religious fervor, I am struck by the irony lived by the Egyptian Jews, last guardians of their past, elderly, vulnerable, and unable to rise above the menace that surrounds them.
And what of the Coptic Christians? They who claim to possibly be descended from the Pharaonic splendors of old? Their churches are burned and their populations suffer silently in fear of exile from the only country that holds their roots.
Why is there not more clamor? Human values are at issue here. The Middle East hosts a war that destroys history and leaves the Arab lands in economic chaos, unable to fill the void they themselves have caused. This virus will not die, and it will compromise everything we hold dear unless an antidote is found soon.  Read More
Be the first to comment