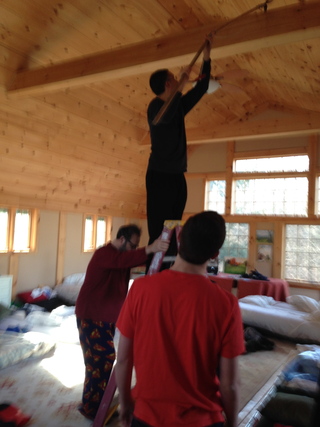 Team Work to Snare a Sneaker

Suddenly the pleasures of Thanksgiving and Hanouka collided, the only time this will happen in our lifetime, bringing lights and song, children and grandchildren, rituals, gifts and food, adventure and misadventure. The old stone house in upstate New York awoke from its solitude, and breathed again, warmth and flickering firelight greeting our arrival the day before we expected two carloads of our favorite people to drive in from New York City and JFK. The weather outside was misty and gloomy as we walked in, but I sank into a chair and gave myself over to the house and its welcome. I plunged into a very deep sleep, and by the time I was able to move my limbs again, the house had worked its healing. Some of the pain and stress of the preceding weeks had given way to happy anticipation.
What we had not anticipated was that by Wednesday evening as people and laughter, bags and cases and armloads of food and produce tumbled into the house, the water pressure had completely failed. Fifteen people of varying ages found themselves without water for showers, cooking, hand-washing and other obvious needs. Repeated phone calls to the installers of the most recent pump replacement brought no answers - it was, of course, the eve of Thanksgiving - until my eldest grandson turned to social media and produced an emergency plumber, plucked from his other engagements as if by magic, and as if by magic the man replaced a switch, and instantly the noise level rose, festivities resumed in full swing with all hands on deck, enticing aroma began to fill the air as the turkey roasted, and we milled about the kitchen, the snap and crackle of a roaring fire in the living room fireplace completing the sensory symphony.
Two days later, a football hurled over the high barn beams landed inside the beam by mistake. We had not realized that they were hollow. A large sneaker followed with the intention of dislodging the ball, but it disappeared into the hollow of the beam, leaving a large male foot unshod and a projected family hike in disarray. Tall sons and grandsons wielding the apple-picker and branch-cutting scythe from the top of a ladder met with no success, until my eldest son removed the scythe from the end of its extended arm, bent it down, rigged it like a fishhook, and the sneaker, snared by its laces, appeared and tumbled to the floor, amid cheers and applause from the crowd.
What more can be said? It was a short, beautiful time out of time, restorative, bonding, fun, and delicious. I give thanks with all my being, and step carefully back into my life to pick up and ravel frayed ends, as my family heads back into theirs, leaving us warmed by the scintillating joyful memories jostling with other times of happiness, family, and reunion, casting the recent past into a sepia haze in the background.
We parted, lingering over hugs, fighting tears, eager for the next time.

I like it a lot!!!!! But you forgot to mention the power outage in the barn. And it was a football not a basketball...not that it matters but it was a scythe that uncle alan got the shoe with.

just read it..only a year later...and absolutely loved it!!!...what beautiful and evocative prose..everywhere in your blog!!chazzak!! your DIL aka KBN